In Praise of Dave.. 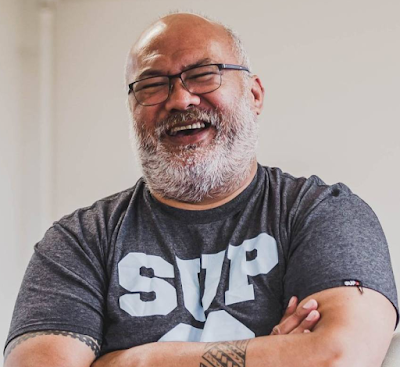 Dave Fane is a performer I've worked with many times in the past. He's like a huge bear hug of a man. No just in size but also in mana. He encases you. Overwhelms you. I find myself leaving any encounter with Dave feeling better about not just myself, but about the world.

He's the guy you want to hang out with in the bar. He has the best stories and always listens attentively to yours. That's a rare quality in this day and age.

I can't remember the first time I met Dave but I would like to recount a couple of small encounters to you. These will help give you an insight into the man behind the performer.

One. I was an extra in a TV show. I was hanging around waiting for something to happen and Dave approached me. "Wanna play some chess bro?" I had to confess to him that it was a LONG time since I'd actually played. He patted me on the back and sat me down. He assured me I'd be fine. A short while into the game he looked at me and said "Yep you haven't played in a real long time." He laughed and wiped me off the board. I wasn't anyone important. I was a hapless extra standing around looking gormless but Dave took me under his wing and made me feel welcome.

Two. I bumped into Dave in a bar in Auckland. It was loud. It was dark. It was pumping. Dave saw me and a smile sprung to his face. He wrapped an arm around me and said "I loved your movie mate" Dave, by this time, was an actor who was linked to so many NZ hits like "Sione's Wedding", "Outrageous Fortune" and "Bro Town" - stuff that was cutting edge and subversive. My movie was none of these things. It was a sweet, feel-good story that I was incredibly proud of. It went to number one at the box office. "Second-Hand Wedding". It wasn't "edgy" or "worthy" and, as a result, I got a lot of stick from some of my contemporaries for making something they saw as "lightweight" and "cheesy." Dave didn't, he saw it for what it was. A movie about family. And he said so, it was the first piece of unsolicited, genuine praise I'd had from someone in the industry. "Second-Hand Wedding" was a movie I wrote about my family my mother, father and sister. Dave was so warm and, well so "Dave", I was really moved. I had to nip to the loo to have a little cry.

Three. We were casting for "Fresh Eggs" and the network had rejected everyone we'd put forward to play the roll of Pig. Pig is a pivotal part of the story. He's the monster that shows up and kicks the series into gear. He had to be terrifying. He had to be a bad mofo. We were getting desperate. In the end someone suggested Dave. The network jumped at this. Dave was a "name" that they could use to sell the show. I was happy and then panic set in. Dave - cuddly, loveable Dave? An actor with a high profile from playing funny, likeable characters? Playing a monstrous baddie? A baddie that so much of our series was hinged on? Gulp. Then I saw his performance. I had forgotten that Dave Fane is not just a comedian he's an utterly magnificent actor. He brought both menace and comedy to the character of Pig and helped us nail our first episode. Dave you splendid man, thank you.

I have noticed that Dave has recently been cast in Taika Waititi's up-coming movie "Next Goal Wins" An adaptation of the 2014 documentary that follows the struggles of an American Samoa football team as they go from perennial losers into winners. I'm sure Dave will shine in whatever role he is in but this is proof positive that good things do happen to good people and, if you put in the work into your chosen craft, you will always rise. Dave is, and always has been, a terrific guy to be around but only in the last few years have I realised he's also an inspiration to me. Manuia Dave!
Posted by Nick Ward at 5:10 PM