That's not what the probes are for... 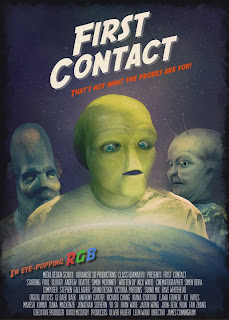 UFO sightings have been in decline since 1960. The experts cannot agree on an explanation for this. Here's the latest movie what I wrote and brought to life by the stone cold genius of James Cunningham and the very clever people at the Media Design School. Join us in a journey into the final frontier...
First Contact - the movie.
Posted by Nick Ward at 2:07 AM 4 comments: 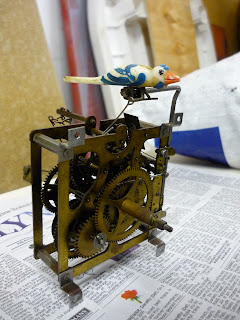 This has been a long hard journey but finally I have the internal mechanism of my flip cuckoo clock. Yep you heard me right a cuckoo clock that flips.

This madness started a short time ago when I inherited a piece of our family history. My Great Uncle Bill's cuckoo clock. It was in a sorry state of disrepair so I took it completely to pieces and started to spruce her up. It was a much bigger job than expected now I'm waiting for one small part to arrive and then I can finally put it all together.

In the meantime I've got myself a bit obsessed with cuckoo clocks. I remember standing watching Uncle Bill's clock and waiting for it to sing. Having it back in my life has brought back some happy childhood memories. It was a time before Playstation when a mechanical bird could keep a child amused for hours - literally.

Since I'd taken Uncle Bills clock to pieces I had a layout for the body of the clock but the inside was a different kettle of fish altogether. But then things started getting interesting. I thought why not take my clocks a bit left field. Why not combine a cuckoo clock with a flip clock?

The first step was I needed to find a 70s style flip clock and strip it down. 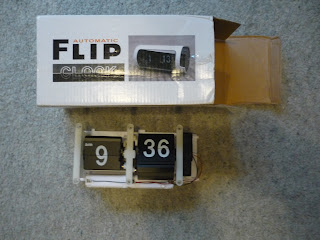 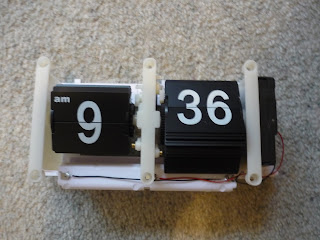 Then I had to bash build a cuckoo mechanism that would work with the flip. Because the flip is electronic I had find electronic cuckoo bits to work with it. 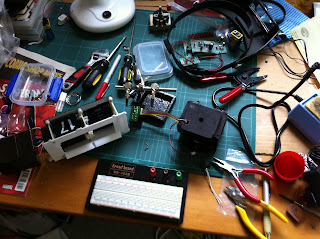 This involved a lot of wiring, a lot of cursing and a lot of kiwi ingenuity. Now I want you look very carefully at this little dickens... 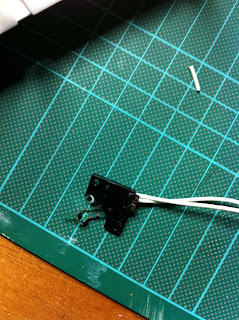 This is the trigger mechanism for the cuckoo. I had to find a way to make the flip clock trigger this. This little piece of metal and plastic caused me a lot of stress. I wreaked two flip clocks and several quartz movements to get this blasted thing to work. Finally with some superglue, a broken clock mechanism, a screw and a lot of blind luck I convinced this trigger and my cuckoo to make sweet, sweet love.

Here, for your viewing pleasure, is the working flip cuckoo...

I can't tell you the how much trial and error it took to get here but it was so worth it. Flippin' awesome!
Posted by Nick Ward at 2:49 AM 2 comments:

I’ve been hellishly busy lately so this blog has gone sadly neglected. However last night I went to the first ever New Zealand Writers Awards. As you would expect it was a tight, well-run evening filled with pithy speeches, fine company and a fair amount of imbibing. I wonder is the collective a “Scribble of Writers”?
My favorite part of the evening started with a conversation I had with my friend Brian. He’s a good writer and well on the way up. We were standing there with a producer when the assembled mass of writers were called into main room. Brian legged it and the producer gave me his card and said “I’m looking for a writer - will you give my card to Brian?” A humbling moment.
It was extremely enjoyable evening. But as it is with these things it got me thinking. Many of these people are extremely successful writers. They are, however, very different in the way they approach their work. Some work better under pressure while others crumble as the screws tighten. Some work late at night, others early in the morning. Some will do ten pages a day, others will take ten years to write a screenplay. We’re a funny bunch but what  - if anything - do we wordsmiths share in common?
My last blog was about common mistakes in writing. Cal from the cave of the cool asked this question: “I would be interested in you doing a post about scriptwriting that explains to me how many really bad scripts get made into movies. I always read about script doctors who are called to 'tweet' a script. Does too many cooks in the kitchen always mean the death of a great story?”
Now believe it or not the commonality of writers and the success of “bad movies” are linked. Which brings me to my workbench. The place where I write is also the place I build my “projects”. When it’s time for a changeover the laptop gets packed away and the soldering iron comes out. Whether I’m writing or building a project I rely on same thing.
The quality of my tools. 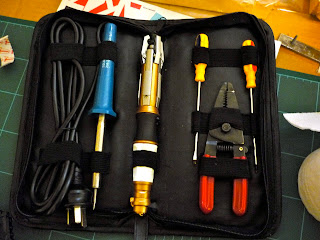 Which comes back to that room full of writers. However they write they all use the same tools. I’m not talking about pens, pencils or laptops.
I’m talking about words.
They are our tools and successful writers know how to use them. They wield them with passion, confidence and flair. They take these words and make them sing. They create stories from these words. While every great story should be different from the one before they use story-telling technics that have been around since the ancient greeks. Aristotle’s Poetics was the original “game plan” for how to write a story and to be perfectly honest things haven’t changed much since then. The best stories (not matter how wildly creative they appears to be) still adhere to these principles. The difference is how we use our tools to shape these tales. That’s the trick and that’s where the problem of bad scripts lies.
You see where there’s a formula people think they can reproduce the same successful product over and over again. Now while this might well work for making sausages it doesn’t apply to writing. This is because of the magic created by the words. Yes structure is extremely important in storytelling but it’s a fool who thinks that they can apply a formula to craft of writing. The experienced writer plays within the confines of structure and creates a script that is both individual and original.
Great writers write great scripts. Inversely the “sausage factory” mentality of some producers creates the opposite. So in answer to Cal’s question bad scripts come from people who don’t understand the craft of writing.
So I’d like to finish by raising a glass to the winners of last night’s awards and all the many clever bastard writers who were in attendance. You guys make magic happen.
Posted by Nick Ward at 9:21 PM 3 comments: