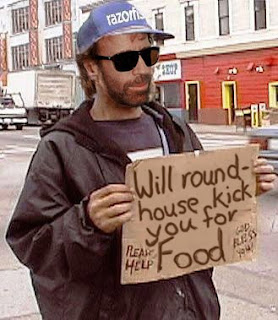 In an effort to keep you lovely people amused and make joining my blogg worth your dime I have decided to post this piece of writing from my past. I wrote this a long time ago for M2 magazine. It was gentler time when Chuck Norris facts were all the rage. They never published it because they were afraid of being sued. I don't know what all the fuss is about because most of this is true. Probably.

Where Are They Now? Chuck Norris.

“Chuck Norris does not sleep. He waits.”

Wednesday 25 January 2006. The internet posting on CNN.com read as follows:

Chuck Norris, at the age of 65, passed away from a massive heart attack. He was at his home working out on his Total Gym, having sex with his wife, fighting three ninjas and playing with his kids when he suddenly complained that a train was running over his heart. The autopsy revealed that Chuck Norris did not have a heart, nor was he even human.

There is a great deal of debate about Chuck Norris’s origins. But whether he was created in as part of a secret military experiment or discovered washed up on a beach after a meteor shower this much is certain he was born. If hatching from an egg counts as birth.

Chuck Norris was born March 10th 1940. He is part Irish, part Cherokee Indian and part industrial earth-moving equipment. Norris wasn’t born in the traditional sense instead he punched his way out of his mother’s womb and grew a beard shortly afterwards. Contrary to popular belief there isn’t a chin under his beard just another fist.

He spent his early childhood engaged in a number of pursuits. In this time he counted to infinity, twice. He also perfected the art of internal cooking with allowed him to cook food to temperature of up to 200 degree Celsius within his stomach cavity. What’s more it was during this time that Chuck discovered he had two speeds - walk and kill.

By age fourteen he was ten feet tall, weighted two tonnes and could breath fire. At age fifteen he became the first man ever to beat a brick wall in a game of tennis. During his life he has never taken a shower he prefers to have bloodbaths instead. He also sheds his skin once a year and doesn't have blood. He is filled with magma.

In 1958 Norris joined the US Air Force as a Military Policeman and Weapon of Mass Destruction (a term that was originally coined to describe Norris). He was sent to Osan Air Base South Korea. The Korean war ended shortly after the army announced that Chuck was coming. It was in South Korea that Norris acquired the nickname Chuck - due to his favorite pastime of chucking people into the sky. One of this commanding officers once asked Chuck Norris if his real name is "Charles". Chuck Norris did not respond, he simply stared at him until he exploded.

It was also in Korea that Norris began his training in martial arts. He mastered all known martial arts in a single afternoon then killed all his teachers so they could never hand on the details of his training sessions. This peak in roundhouse-kick related deaths of black belt teachers is often referred to the Walker Chainsaw Massacre in honor of him - but no one ever calls it that because they’re frightened he’ll hear them.

Norris returned to The US and set up a series of karate schools across the country. With the money he made he brought an ice cream truck which he covered in skulls and still drove up until his death. This was also where his life long interest in hunting began. But because the word “hunting” implies a sense of failure he never uses this term instead Chuck Norris goes killing.

Norris also made his moves into the entertainment industry - staring, producing, writing, lighting, directing the hugely popular Walker: Texas Ranger TV series. At one time this was the only show screening on all tv stations in the US mainly because the networks were too afraid to say no to Norris and the general public was too afraid to watch anything else in case he caught them. The credits that roll after Walker: Texas Ranger is actually a list of fatalities that occurred during the making of the episode.

Chuck Norris used to start everyday with a protein shake made from Carnation Instant Breakfast, one dozen eggs, pure Colombian cocaine, and rattlesnake venom. He injects it directly into his neck with a syringe.

In recent years Norris has become the object of an Internet phenomenon known as Chuck Norris Facts documenting and proclaiming fictional, often insanely heroic feats and characteristics. Norris has written his own response to the parody on his website.

“I've seen some of them. Some are funny. Some are pretty far out. Being more a student of the Wild West than the wild world of the Internet,”

He goes onto invite anyone who’s interested in the real facts about Chuck Norris to purchase his autobiography and threatens to roundhouse kick them if they don’t. So as you have no doubt guessed Chuck Norris isn’t dead - he’s just waiting.

Why Wood of Kings? 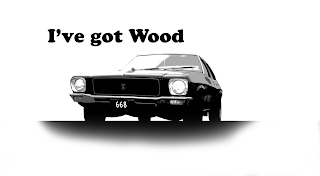 Simple pleasure in life #23. Driving down a narrow road and listening as the gentle rumble of the KIngswood sets off car alarms. Joy.
A few years ago I bought a car that would change my life. Until that point cars had only ever been something I used to get from A to Z. My father - for those of you that know him - is a man with passions that lie under the hood of car. Specifically Model T Fords.
I had begun to think the automotive gene had skipped a generation. Then the Beast came into my life. And it was love at first sight.
The Holden Kingswood was manufactured from 1968 through to 1984 by General Motors-Holden's, the Australian subsidiary of General Motors (GM). My car was built in 1972 making it an “HQ” Holden and 38 years young. She’s got a 202 cubic inch six-cylinder engine and what is those in the know call “three on the tree” which is a three speed column shift gear stick. She’s got bench seats front and back which is always popular with the ladies - I suspect there have been more that a few liaisons in the Kingswood’s back room.
Yes, she’s a grumpy old bird and not a morning car at all. She’s got a really rough matt black paint job and whenever I go back home my father tells me to “get that piece of shit out of my driveway”. There’s no power steering and driving her is more like sailing a ship across the urban sea than driving. She's had more than a few additions over the years. Some tats on her bonnet. A new hood ornament courtesy of the talented artist Martin Horspool. And Mr Bone who hangs from the rearview mirror. She's baggy as all get out and hungry for gas but I love her.
Truth be told, I’ve always wanted a Kingswood, it was a car from my youth that all the bodgies drove. The guys with greasy hair, black T-shirts and the hottest bottle-blonde girlfriends. So I took her for a drive, pressed the cash into the man’s hand and never looked back. Her and I have driven the length of New Zealand many times.
She’s a beast but she’s my beast. She’s the reason I’m King of the Wood.
Posted by Nick Ward at 3:47 AM No comments:

Why do we blog? This is the question. The question I’ve been asking myself before I set off on this little exercise. Do we blog to send our thoughts out into cyberspace in the hopes of making a connection with like minds? Do we do it to entertain? Or inform? Do we do it because we have a point of view we want to impress on others or a world view that we hope will spark the web?

When I consider blogs that I enjoy - “Stuff White People Like”, “Calvin’s Cave of Canadian Coolness”, “Topless Robot”, “Oddee”, “Gizmodo” “Positive Ape” - these quirky blogs inform me, inspire me, make me laugh and have a attitude and sense of themselves that make others gravitate towards them.

I’ve also been considering my friends blogs as well. Phil’s “A day in the life of Harvey & Gilmot” speaks on subjects he knows all to well; advertising, media and the joy of a full windsor are all there on his blog. All presented with his unique style and wry wit. Then there’s Saz’s “Libramentum” blog where she shares the daily adventures of her life. Her style just assumes we know all about her family and her staggering knowledge of aircrafts and books. Which is oddly inclusive. Last, but by no means least, is my sisters blog. “Jess life update” does exactly what it says on the box. She makes sure we’re all up-to-date with her travels and what’s happening in her corner of the world. Jegg is presently in Spain with food poisoning.

So what can I add? What shape will my blog take? Well I thought I’d t use this place to share some stuff with you. I’m a professional screenwriter so I can chat about that. The challenges and tribulations of that part of my life. The articles I’ve written for various publications. Yes you’ll find tidbits from that side of my life but the weight of this blog will lean towards my adventures and the various creative projects I’ve decided to embark on. That - I hope - should be enough.