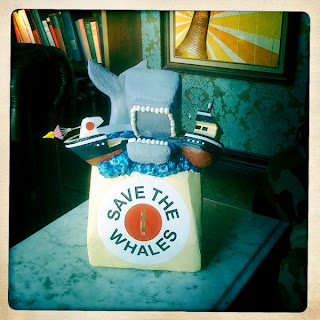 This is a prop that the director made for his new movie.  It's not often you hear about the director making props. Well this is no ordinary movie and neither is the story behind it.
It's been a while since I posted anything - I've been developing some fun projects for you people - but now I have something really important to write about.
I'd like to say a big, fat congratulations to my fine friends Simon, Bob and Maile.
A while ago Simon came to me with a mad - but brilliant - idea of setting a TV series in an old folks home. I built on it and created a story about an retired cop who comes out of retirement and goes undercover into the home.
We took the idea to the networks and predictably they didn't like it. "Nobody wants to see old people".
So we moved to writing it as a film.  I didn't have the time to commit to the screenplay but I suggested Bob Moore.
Bob is a very good writer and an even better friend. And he's married to my cousin (nepotism at work folks). I lent a hand as best I could as script consultant. But Bob didn't need much help he wrote a cracking little script that is involving, funny and  bittersweet.
Then they needed a producer. Someone smart and hungry. A producer they could trust. A producer who could bring it in over the line. So naturally I turned to the girl who broke my heart when I was 23. Welcome to the madhouse Maile. She was a perfect fit.
The team was in place. First time feature film director. First time feature film writer. First time feature film producer.
It was all go. They have all worked their guts out and last week they received news they had received funding to make their movie. It's been a lot of hard work. For no money. For a long, long time. For a project that initially didn't receive a great deal of support.
But Simon, Bob and Maile stuck at it and now they're going to be filming their movie in a few months time. Needless to say a lot of people are wondering how this project came out of nowhere. Well the simple answer is it didn't come out of nowhere - three people have put their hearts and souls into this project for longer than you might expect. A lot of late nights and a lot of hard graft.
This is what happens when you have a dream and work hard to make it happen. They're an inspiration to me and they should be to you as well.
The film is called - aptly - REST FOR THE WICKED. These guys haven't got much rest bringing it in and I'm sure that won't stop when they start filming.
Posted by Nick Ward at 2:56 AM 7 comments:

Check out my Junk! 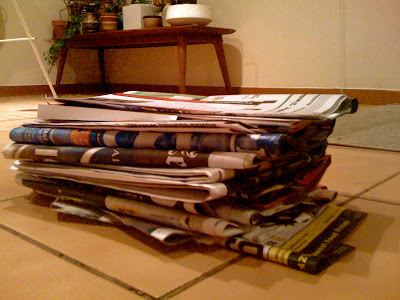 So what have I been doing over the month of July? Simple answer. I've been collecting my junk mail. Usually I just take all the crap that turns up in out mailbox and throw it straight into the recycling bin. However I got seized by an idea.

I decided to see how much junk mail I receive in a month. This is the final result. Flyers. Leaflets. Giveaway papers filled with Ads. Now I'll be honest with you July turned out to be a bit of a lean month for junk mail but it still made a pretty heavy pile. I weighted it on the bathroom scales and it came up 2.5kgs. 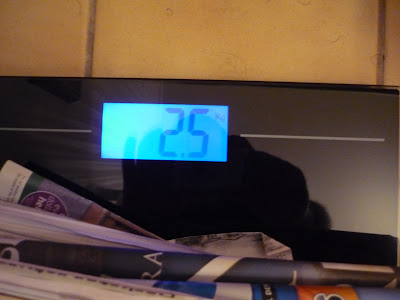 So lets do some simple math. 2.5 multiplied by 12 months. That's 30kgs! Now according to WikiAnswers 1.3 million people live here in Auckland. Now I don't have access to how many homes there are but lets say four people to a residence. That's about 325,000 houses. Multiply that by 30kgs. That's around about 9,750 tons of junk mail a year!

The same weight as a WWII Royal Navy Cruiser. Now also it takes 17 trees to make one ton of paper. So that's 165,750 trees that die so we can hear that pizzas now have 10% more cheese. 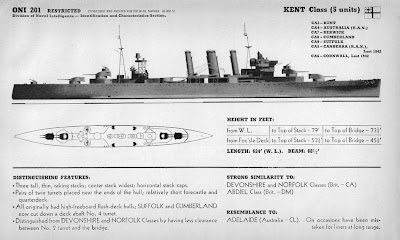 I am not by any stretch of the imagination a tree hugger but I can't stand junk mail. I'll be putting one of those "No Junk Mail" signs on my mail box. But can I - one man - make a difference? Auckland city council if you're listening then please stop this unsolicited madness! Love and hugs. Nick Ward. Now what will I do this month?

Anyone else want to weigh their junk? Go on I dare you.