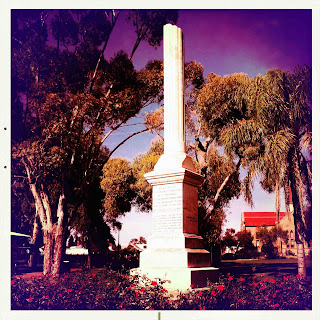 If you’re walking in Broken Hill you might happen across a lone monument standing in the town park.
You might expect to find a memorial to the town fathers or the mining community. But not here, instead they have decided to erect a monument to the band that played on the Titanic.
Why?
Is it because they respected the way they face death with such fortitude? Could be. Death is a constant companion out here in the wilds of outback and down in the depths of the mines.
Maybe in an environment where water is such a valuable commodity the fact that someone could die by being immersed in it is somehow both romantic and also morbidly extravagant.
This memorial speaks volumes about the people of Broken Hill. They exist away from the kind of thinking that would question such a strange addition to the town centre. When they make up their mind to do something out here they do it. They will accomplish it whether the rest of the world cares or not.
It’s the same kind of thinking that has built an Olympic-sized swimming pool in a town that has just suffered through ten years of drought. Ask them what they will do with the pool when another drought hits and they will reply with a larconic smile and explain that they’ll just shut two of the lanes.
In any other place ten years of drought might be cause for serious concern but out here they take it in their stride. Like the memorial to the Titanic’s band it’s something that outsiders will never truly understand.