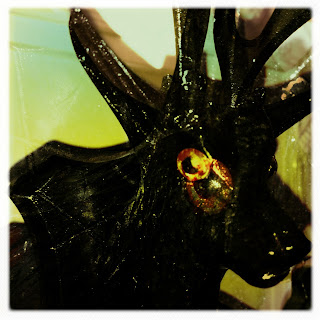 My Uncle Bill was a funny old fish. He was a man who could be fascinating one minute, crazy the next and then downright obnoxious the next. He was tinker. One day he began assembling a few bits of wood on his living room floor the next he had build a rowboat out of those bits - not before moving the whole show to the garage of course!
Now as kids in our family we used to visit our great-grandmother on the Kapiti Coast. She was a 101 when she died and right up until the end still was still the full quid. Uncle Bill lived with her and she looked after him, cooking and cleaning up after him. We called her "Nanny-at-the-Water" because her house was perched right at the edge of a wild and wonderful west coast of New Zealand. She used to go for a dip in that wild ocean every day winter or summer. That was maybe one of her  secrets to long life (that and possibly the cigarettes she smoked since she was 18!). In one of the spring tides Nanny-at-the-Water's house was swept into that wild ocean but thankfully the sea scouts managed to save so many pieces of wonderfulness from her house.
As great-grandchildren we remember many of the strange treasures that filled her home. The nut-cracking bowl with the matching metal hammer. The painting of the leopard that always gave me the creeps. And the scuttling bowl boiling on the stove - crabs fresh from the ocean. But one thing I'll never forget was Uncle Bill's cuckoo clock.
Legend has it he won it in some kind of spelling competition as a child. It would hand on the wall and be the source of constant intrigue for the grandchildren. When is the cuckoo going to pop out? Is it time? That was what passed for entertainment back then - you kids can keep your PSP and your iPods - a little mechanical bird was all we needed!
Anyhow last year Uncle Bill tinkered his last tinker. Our Aunty Virginia is notorious in our family for swooping into dead relatives homes and scoring all the best stuff. My grandfathers old super eight movies, his magic tricks great Aunty Eileen's glass fruit lamp. So imagine my surprise when she gave me Bill's clock. I guess she knows I have the tinkering gene and also it was in a very sorry state. Actually it was trash. 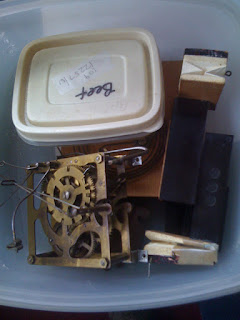 So I set to fixing it up. I cleaned it and took it to pieces years of grime (and Nan's nicotine) and Bill's tinkering had left it pretty grubby and inoperative. It was a mammoth task one that would end up taking me the best part of a year. In the process of stripping down the wood I realized that the wood was pretty done in. I'll be honest with you I don't know jack shit about staining wood but I do know how to paint things (years of model-kit making) so I thought I'd paint it. With some paint I had lying around. Paint that was intended to be used to touch up my Holden Kingswood. Gloss automotive black. 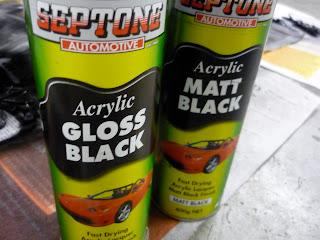 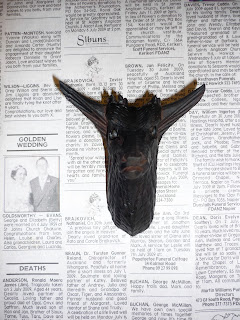 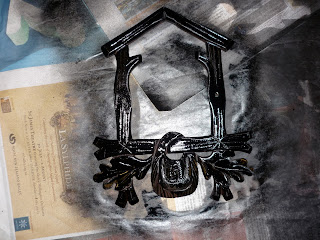 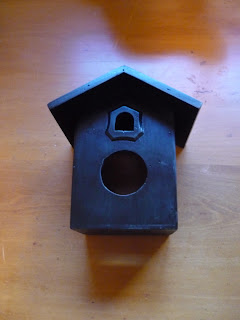 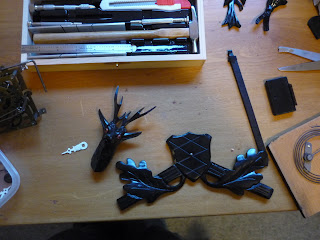 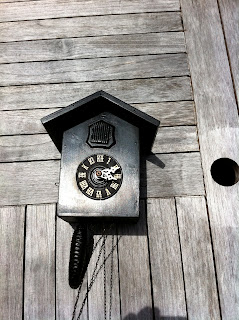 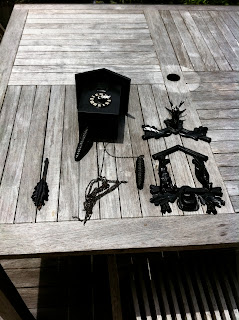 Then there was the cuckoo. This little guy hadn't seen the light of day for a few years I suspect. The job they did in the factory wasn't exactly high-end as you'll see. So I thought I'd give the little guy a new paint job as well. In keeping with the "Gloss-Black Forest" theme I thought he'd look good in white. Clean glossy white. I must apologise toany purists out there who feel in the process of all this that I'm destroying a valuable antique but I can only hope that I'm bringing new life to a family keepsake. I am taking Mad Uncle Bill's torch and running with it - Mad Uncle Nick. 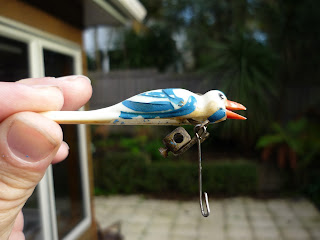 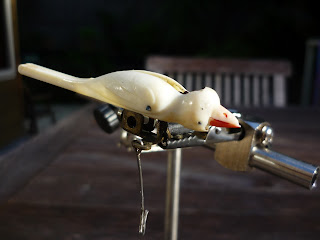 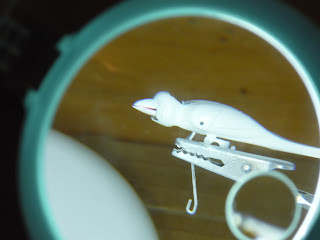 I think he looks pretty smart in his new threads. Clean and minimal. It was darn fiddly work though. But not as fiddly as the clock face... 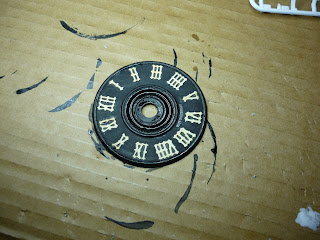 Now those of you that know me will have seen my porcelain birds. The ducks... 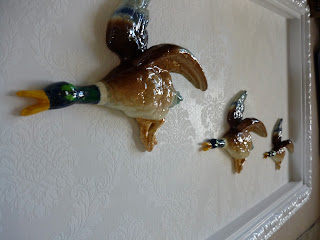 And the Guinness toucans. 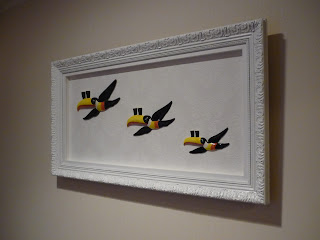 I've mounted these puppies in white frames and inside the frames I've put white "flocked" wallpaper. I dig these because they're like a little portal into another world. As if they're framing a window to a wall in someone else's house. This has worked well with the birds so I thought I'd give the cuckoo clock the same treatment. 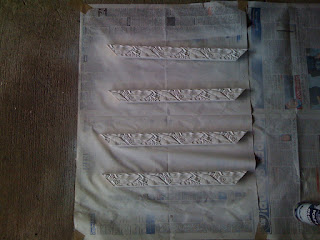 First I wanted an elaborate white frame. So I painted a ugly one gloss white. Then gave it the boxed flocked treatment. 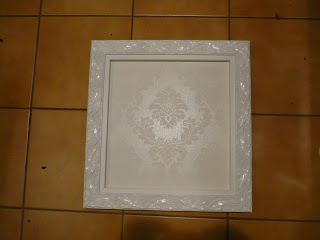 Don't think the irony of mounting birds on "flocked" wallpaper has escaped me. It's just a sweet little touch that if you get it you get it. Finally the frame gets a screw in it and  goes up on the wall. 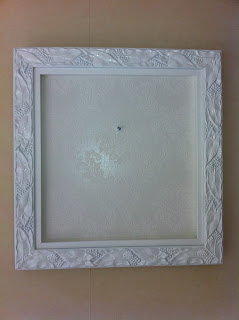 Naturally we've left enough clearance for the chains, weights and pendulums. So it's time to frame the clock. 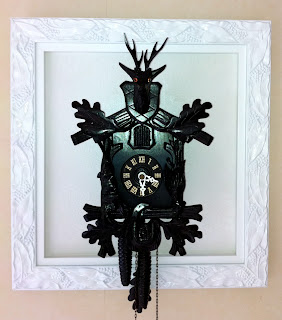 I think it looks pretty sweet in there don't you reckon? So here's some arty shots of it just to show it off. 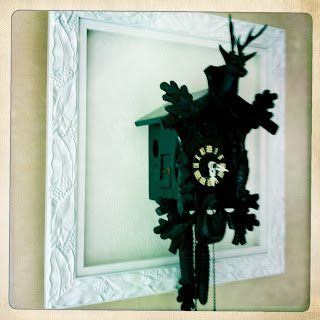 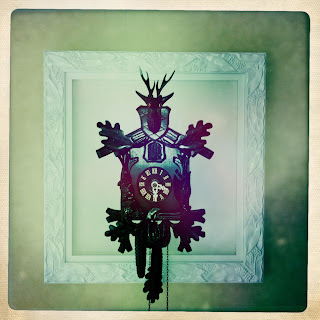 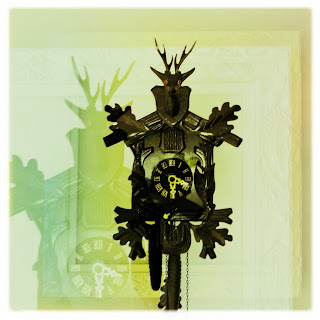 I'm really pleased to see it finally all come together. It keeps lousy time but that's not the point is it? This will be in our family for another eighty years is all I can hope.
Posted by Nick Ward at 11:10 AM